Ancient Adria was a city of Picenum, situated about 10 km from the Adriatic Sea, between the rivers Vomanus (modern Vomano) and Matrinus (modern Piomba). According to the Antonine Itinerary, it was distant 15 Roman miles from Castrum Novum and 14 from Teate (modern Chieti). It has been supposed, with much probability, to be of Etruscan origin, and a colony from the more celebrated city of the name, now Adria in the Veneto region, though there is no historical evidence of the fact. It belonged to the Praetutii for a time. 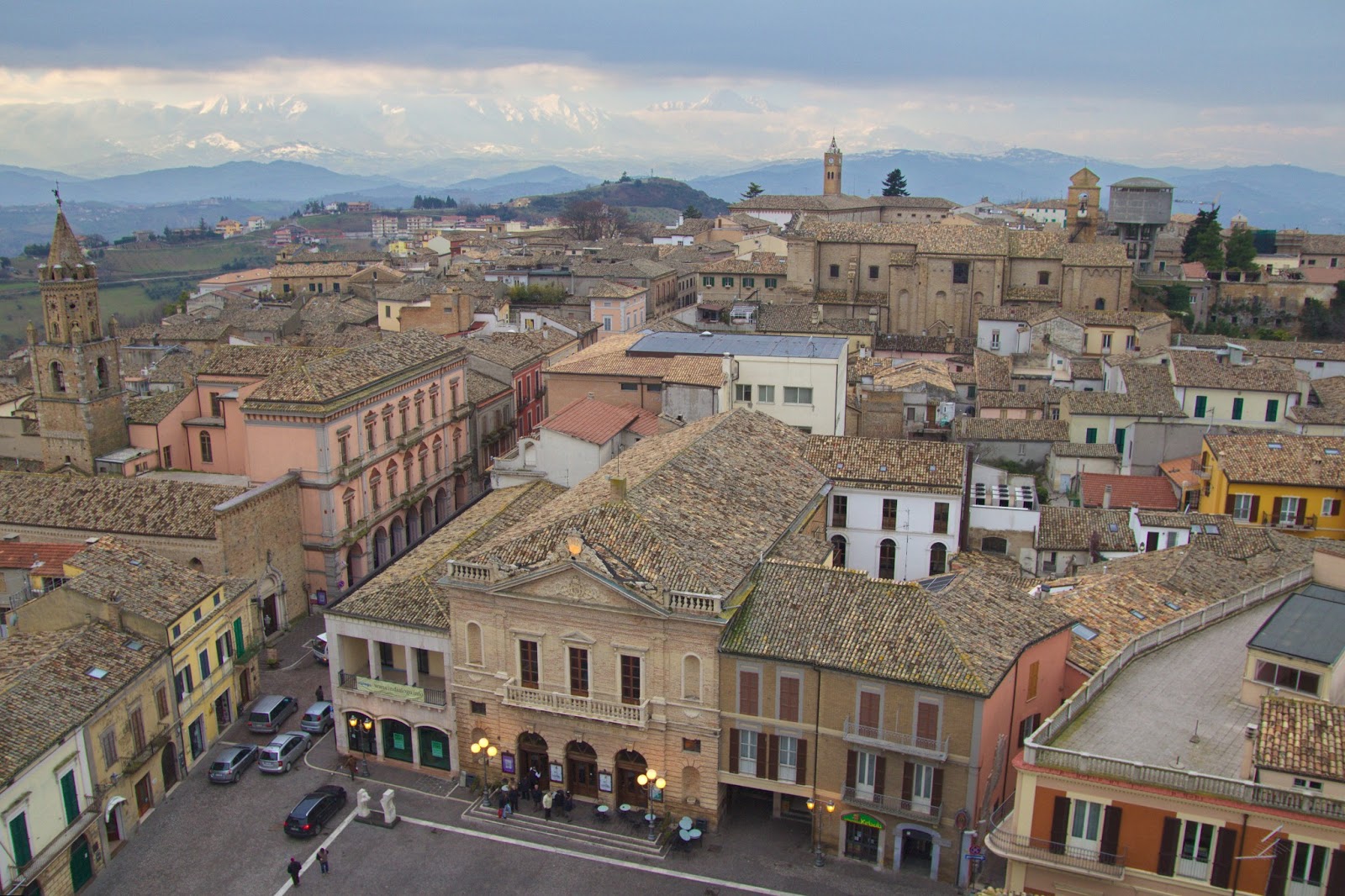 The city was founded by Greeks from Aegina and reestablished by Dionysius I the tyrant of Syracuse in the 4th century BC. The first certain historical notice of Adria is the establishment of a Roman colony there about 282 BCE. In the early part of the Second Punic War (217 BCE) its territory was ravaged by Hannibal; but notwithstanding this calamity, it was one of the 18 Latin colonies which, in 209 BCE, were faithful to the cause of Rome, and willing to continue their contributions both of men and money.

At a later period, according to the Liber de Coloniis, it must have received a fresh colony, probably under Augustus: hence it is termed a Colonia, both by Pliny and in inscriptions. One of these gives it the titles of Colonia Aelia Hadria, whence it would appear that it had been re-established by the emperor Hadrian, whose family was originally derived from hence, though he was himself a native of Spain.

The territory of Adria (ager Adrianus), though subsequently included in Picenum, appears to have originally formed a separate and independent district, bounded on the north by the river Vomanus (Vomano), and on the south by the Matrinus (la Piomba); at the mouth of this latter river was a town bearing the name of Matrinum, which served as the port of Adria; the city itself stood on a hill a few miles inland, on the same site still occupied by the modern Atri, a place of some consideration, with the title of a city, and the see of a bishop. Great part of the circuit of the ancient walls may be still traced, and mosaic pavements and other remains of buildings are also preserved. According to the Antonine Itinerary Adria (which may have been the original terminus of the Via Caecilia), was the point of junction of the Via Salaria and Via Valeria, a circumstance which probably contributed to its importance and flourishing condition under the Roman Empire.

After the fall of Rome, the region was subjected, along with most of northern and central Italy, to a long period of violent conflict. Ultimately, in the 6th century, the Lombards succeeded in establishing hegemony over the area, and Atri and other parts of Abruzzo found themselves annexed to the Duchy of Spoleto. The Lombards were displaced by the Normans, whose noble Acquaviva family ruled on the town for decades from about 1393, before merging their lands into the Kingdom of Naples. The rule of the Acquaivivas marked the highpoint of Atri's greatest power and splendor.

It is now generally admitted that the coins of Adria (with the legend "HAT.") belong to the city of Picenum, not that of the Veneto; but great difference of opinion has been entertained as to their age. They belong to the class commonly known as aes grave, and are even among the heaviest specimens known, exceeding in weight the most ancient Roman aeses. On this account they have been assigned to a very remote antiquity, some referring them to the Etruscan, others to the Greek, settlers. But there seems much reason to believe that they are not really so ancient, and belong, in fact, to the Roman colony, which was founded previous to the general reduction of the Italian brass coinage.

Some historians say that the city was founded by the Illyrians in the eleventh century BCE. They think that the city Atri was named after the Illyrian god Hatranus (Hatrani). The ancient name has been also described as the source from which the Adriatic Sea derived its name. Others maintain that the sea was named for Adria, an Etruscan city in Veneto region.

The municipal park of Atri is a green area of about 3 hectares close to the historic center. It was built on areas owned by the Duke and the canons of the cathedral, realized by Paul Odescalchi, bishop of Atri. It comprises artificial terraces (made before the Second World War) for about three hectares, in a pleasantly arid area.

The boulevards of the villa are about 600 meters long. The remaining viability inside of the park is closed to traffic, and it mainly comprises paths.

Very interesting are also the caves of the Villa Comunale, probably once used as stables by the Capuchin friars. Their origin, however, is expected to be much older, and, although there is now no connection to the historic center, it is probable that they were used to escape during pirate raids.

In the park, there are also many sports' facilities, such as the soccer field and basketball court.

Close to the beautiful lookout over the sea and all of the valleys of the Terre del Cerrano (from Roseto degli Abruzzi up to Silvi Marina), there is a spectacular liberty-styled fountain, considered the emblem of the Villa Comunale. By staying close to that area, do not forget to see the old Cedrus Libani tree, considered to be a 300 years olded plant.

The eastern side of the Belvedere is erected over large walls, the ruins of an ancient fortress, once the summer palace of the local bishops.

Another symbol of the villa, renovated in the '30s in an Italian garden, is the formaggione (the big cheese), a cylindrically shaped hedge,comprising conifers, with four entrances (located at the cardinal points). It represents the Garden of Secrets, a recurring element in many gardens of the castles and the noble villas of Italy, especially between the late 1700s and the first half of the last century. The Villa Comunale, a municipal park, provides a place to stroll and to rest.